Android is one of the best operating system a smart phone can ever have. It is so awesome that people can’t explain it in words. With the increasing fire of technology among the crowd, the needs and the uses for these operating systems are also changing; thus Android gets a chief update every year and slight updates every month. These all updates are made so that no one shall feel there is something unconstructive in the OS. The big update this year was the Android Lollipop update which was termed as Android L in the starting but later on after lots of controversies, the name Lollipop came out.

The main cause due to which people love Android is the customizability it offers. That’s also the main reason the amount of iOS users is getting low as compared to the Android Users. You can carve your device according to your needs, mood and personality. You can do almost anything which you want to do from setting custom wallpaper to getting a custom ROM but the main feature which is popular among most of the folks is using a custom launcher. Okay I don’t know why but I can get the smell of jealousy and I don’t know why but it is coming from the side where the owners of Apple devices live, No intention to hurt you apple folks but you all suck! 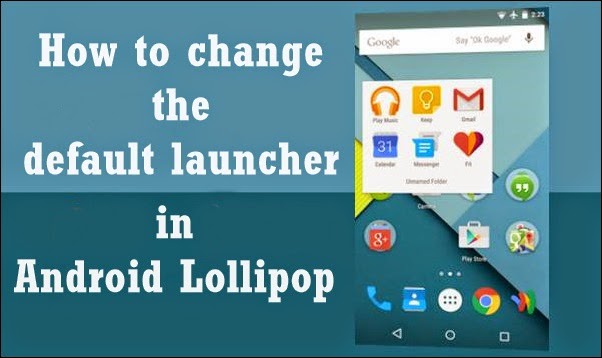 Anyways, moving forward today on the show we have the tutorial to change the default launcher in Android Lollipop. Actually the process is pretty easy but still let me guide you through the woods.

How to change the default launcher in Android Lollipop

The main thing you need to have to change the default launcher in Android L is a custom launcher and that’s obvious. Once you open the Play store and search for custom launchers you will stumble upon many of them and get confused, if you ask me I would suggest you to use Nova launcher with the Voxel icon pack since it is my favorite and who know maybe it will become yours too! Okay, now lets move to the tutorial.

How to remove it?

This is pretty common case among many people and it occurs when someone is not happy with their custom launcher, and if you are among them then stick with me! To remove your custom launcher:
That’s as easy as stealing a lollipop from a kid and I think that you won’t encounter any problem but still if you do so then do let me know in the comment section below!
Android Tips:- Six tips for avoiding viruses and malware on your Android
Stay Tuned for more Android Tutorials.
Android Tutorials
You may also be interested in

How To Send And Receive Money With Google Wallet

How to block app notifications in Android Wear

How to Order from Faasos Mobile App & find Amazing Deals